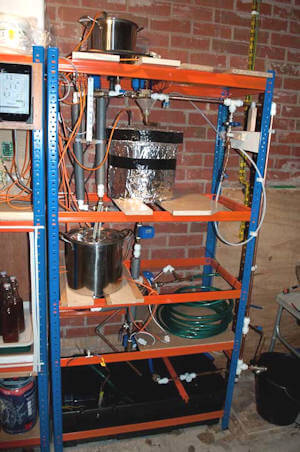 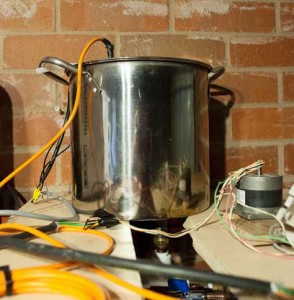 The hot liquor tank is constructed from a standard stainless steel cooking pot, At the bottom of the tank a hole is cut and a heating element screwed in, The heating element used is quite a low power one and is only 1kw. This is all that is really needed to brew on this scale and allows quite accurate heating control.

Incase you were wondering, Liquor is the term for water when used in brewing. 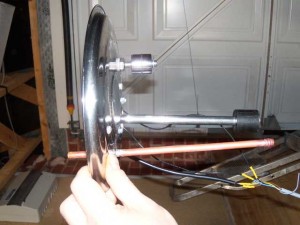 As well as the level gauge transmitter I have also placed an extra simple floating level switch at the top of the tank, This is so the system can automatically stop the water supply if ever high level is reached within the tank.

As well as measuring temperature the tank has a temperature probe inside it to accurately measure the temperature of the hot liquor. The probe is made from sealed thin copper pipe with a one wire temperature device, A ds18b20 chip located within it. I also put a little heat sink compound within the tube to allow for more accurate and faster temperature readings.

Although I currently don’t have this tank insulated, I will probably try and insulate the tank shortly by some simple method. Perhaps part of a hot water cylinder jacket around it.