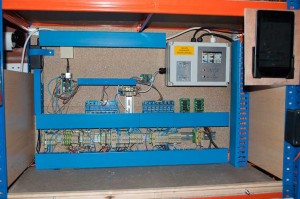 To make the brewery automatic as much as possible involves several modules and components all working together.

All the control pieces of the brewery such as Valves/Level Probes/Temperature Probes etc are all connected to a Pokeys57E module, this low cost module manufactured by PoLabs is a very sophisticated device and contains lot’s of communication protocols already in place to make the communication between all the parts of the brewery quite simple. 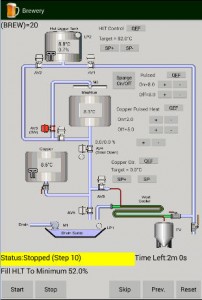 The main display which is used for controlling the brewery from the android tablet.

I could have designed and programmed a board from scratch which did the same purpose but it would have taken me a long time and at the end of the day couldn’t see the reason when someone has already done all the hard work for me.

And the support I’ve received from the manufacturer of the board has always been very good, with a quick response received to any email request even at the weekend.

The Pokeys device itself can contain a small amount of programming to look after certain things on the brewery, I’ve used this programming capability to handle certain important things such as instantly shutting off the water supply in case the Hot Liquor Tank every reached high level, and also to turn off the Heating elements should any problem occur with the Android application.

The main programming and sequence control though is done by an application I have developed to run on my Android Tablet. After developing a couple of other Android applications I though it made sense to use a tablet for controlling the brewery.

The Android application works in a similar way to how a control system works in a real full size brewery, Yet in a low cost form and is completely mobile.

I’ve wired all of the devices and components together through some rail mounted connection blocks. These allow me to easily implement fuses etc and also make it easier to modify and add to the brewery in the future.

On my list of things to do is to tidy all the cabling up quite and bit and put it inside trunking.

More information on all the parts here and how I’ve used them are detailed in my other blog posts.