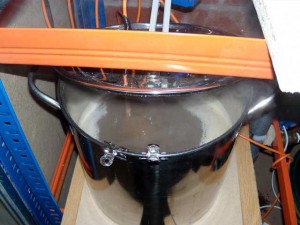 Copper during the start of the boiling of the wort

The copper vessel is used to boil the wort after it’s been brewed in the Mashtun, At this stage the liquor contains all the sugar from the grains and requires boiling to remove any bacteria which may be in the newly brewed wort.

Traditionally made from copper in a brewery, My copper is simply another stainless steel cooking pot. 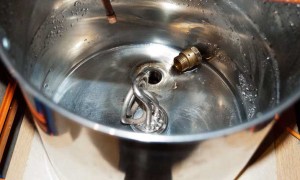 Inside the Copper vessel, showing the heating element, Inlet/Outlet and the small screw in filter.

Similar in design to the hot liquor tank, It contains a 1kw electric heating element and a stainless steel coupler soldered into the bottom of the tank.

To allow me to easily remove the lid while it’s brewing, I’ve fastened a couple of pieces of plastic to the lid as you can see in the photo. The lid also has a temperature probe with a one wire thermometer located within it.

While the wort is boiling in the tank at several times during the boil hops are placed within the tank, To allow the hops to be easily removed after brewing I place these within Tea balls which I have. This makes the clean up afterwards very easy.

I have also soldered together a small filter which I can screw into the inlet/outlet of the tank to stop most of the trub (Sediment) from going into the final fermenting vessel.

I also designed and built a small measuring ruler which I can use to see how much wort I get during the brew. 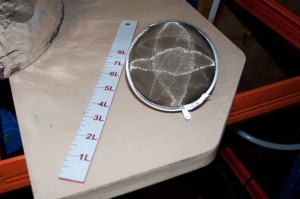 Measuring Stick and Tea Ball for some of the Hops