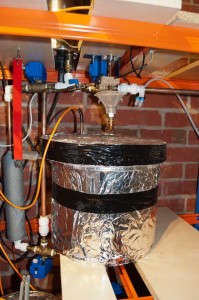 The Mash tun vessel is quite a simple vessel as currently it doesn’t have a heating element of any type. Originally I just tried to use an un-insulated stainless steel cooking pot as the Mash Tun but found that it lost too much temperature at the Mashing stage of the brew where it needs to keep the same temperature for about an hour.

I then insulated the Mash Tun by making a frame of plastic around it so I could insulate it with expanding insulating foam.

You can see from the photo’s that I used a little too much foam. I didn’t really expect it to expand so much over night. 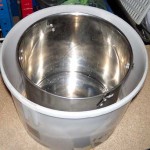 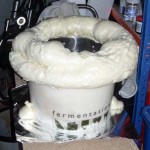 A little over use of Foam when insulating the Mash Tun

Anyway after cutting all the excess away and making a nice insulated lid to go with it I now have an insulated Mash Tun vessel which only uses a few degrees over the hour needed for Mashing of the Brew.

The vessel has a coupling connection underneath constructed with a silver soldered connection the same way as the Hot Liquor tank. 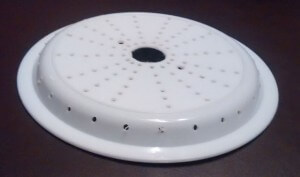 Mash Tun false bottom made from a plastic plate

When the tank contains the grain as part of the mashing process, It needs to have something called a false bottom to allow the draining of the Wort (This is the liquid created after the mashing process which now contains the sugar from the grains). A false bottom is usually just a sheet of metal which is slightly raised of the bottom of the vessel and contains lot’s of tiny holes. Large enough to let the wort through but small enough to stop any grain from getting through.

I created the false bottom by simple drilling holes in a plastic plate. This works great but I made the bad decision of thinking that I would be able to rinse the left over grain through the pipework at the end of the brew. I tried this on a test batch of grain and spent 2 Hours unclogging the pipework when it all got stuck. That was something I didn’t fancy doing again so I decided to create a bag which could be placed inside the Mash tun to keep the grain together. 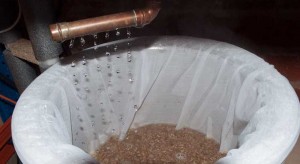 Voile Grain Bag In Use While Sparging Is Active

After reading up on the internet several other people had made a Grain bag from Voile Curtains, I ordered the material from amazon from a couple of pounds and my Mum sewed together to purpose built grain bags. I’ve now used these for a couple of brews and have found them ideal.

I put the original false bottom plate into the bag to allow the grain to be stirred easily and still provide a nice false bottom, then when the brew is completed I simply lift the grain bag out of the Mash Tun, Dispose of the grain in the bin and throw the bag in the washing. 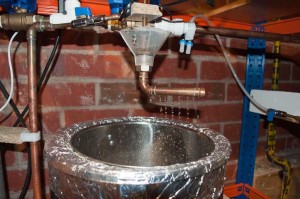 The final thing needed to complete the Mash Tun was a sparging arm. The purpose of this is to gently sprinkle hot liquor onto the top of the grain after the Mashing process has completed. This is method is known as fly sparging. Ideally the rate of sparging water sprinkled onto the top of the grain is the same as the rate of the wort coming from the bottom of the vessel through the false bottom.

The small video below shows the spinning sparge arm in use.

There are other less tricky methods of sparging available such as batch sparging where a batch of water is placed into the Mash Tun before being fully drained and more being batched.

As I always like a challenge I decided to use fly sparging in my brewery anyway and it certainly looks quite cool while sprinkling. Usually people brewing at home purchase a sparging arm made from metal or plastic tubes which uses the power of the water flowing it to spin the arm. I did originally attempt to construct one of the these but I was not happy with the flow of liquid required to make the arm spin so in the end I made one entirely driven by a stepper motor above it. This allows me to put a full sprinkle around the Mash Tun even when I have very little water flowing, which is ideal.

The actual sprinkling arm is made from a mixture of copper pipework, fittings and a plastic funnel.