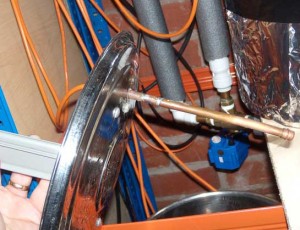 The temperature probes I have used in the brewery are made using Maxim one wire DS18B20 Programmable Resolution 1-Wire Digital Thermometers.

I originally intended on using K type thermocouples, But after purchasing several types I found it hard to make them waterproof and interface them into the overall system. I realise I could have purchased more expensive versions of these and probably wouldn’t have any problems but I have more knowledge of how the Dallas one wire thermometers work anyway. 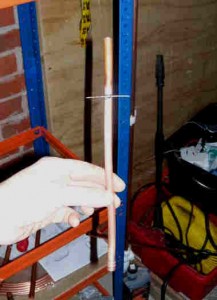 I constructed the actual temperature probes by first off all cutting the required length of 8mm copper pipe and soldering an end stop onto this pipe. After this I cut approximately a 2 inch piece of 15mm copper pipe and straightened it out so I could drill a 8mm hole in the middle of this piece. Then I threaded the 8mm probe through this flat piece and soldered them together. 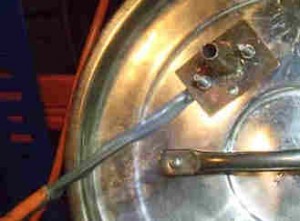 DS18b20 temperature thermometer with cable and JB weld epoxy around it

Then I wired up a DS18b20 thermometer and sealed this with some JB weld to try and stop any condensation problems when the thermometer is placed into the pipe. 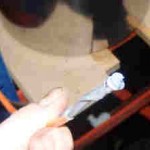 The Pokeys57e module I am using to interface with all the items I use already has all the communications built in to  talk to one wire temperature thermometers, So all I had to do was configure it within the Pokeys57e software and the temperature values were available for use.