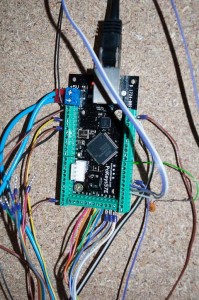 The Pokes57E device I use is a low cost simple to use ethernet based device which combines a lot of inputs and outputs.

If provides 55 digital input and output connections which I use for things such as level probes and driving the relays for the valves and pumps.

It also has 7 analog inputs available though I’m only using 1 of these at the moment to measure the liquid level in the Hot Liquor Tank.

One of the main benefits to me is that it also has all the in built communications to talk to different sensor types including ones on the 1-wire bus which I’m using for the temperatures in the vessels. 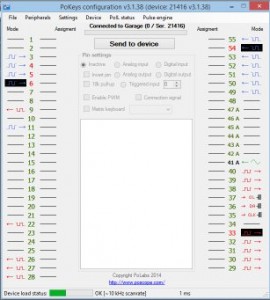 The configuration software used for configuring the Pokeys57E device

The list of what this module can do goes on and on and is extremely flexible, I’m also using one of the devices in my greenhouse to monitor temperatures and levels in nutrient tanks. In this situation I’m also using the LCD and keyboard capabilities of the device to allow it to display the greenhouse situation and modify settings through a keyboard.

The overall configuration of the device is done through a simple to use piece of included software. 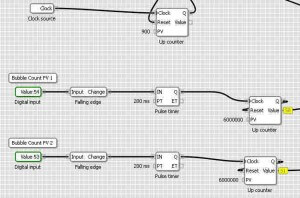 Example of the programming within the Pokeys device

As well as the standard device you can also program the device to do certain things using a language/program called PoBlocks, I don’t really use this part of the device to it’s fullest as it makes more sense to do 99% of the programming and sequencing of the brewery within the Android application as it’s more flexible.

But for some things such as shutting of the water supply if the Hot Liquor tank goes to high level or shutting off the heating elements if necessary the programming capabilities are ideal as they don’t use any communications and just instantly take effect. So I’ve used them for this.

The device comes with all the communications protocols described in a document to allow any other ethernet device to communicate and read and write the status’s of the inputs and outputs. This is how I can control the brewery from the Android application. The Android application uses the described communication protocol to talk directly to the Pokeys57E board to find out the status of the brewery at all times and drive anything necessary at certain stages in the processes.

I’ve currently got the Pokeys57E board wired into a wireless router so that the Android tablet I am using does not even need a wired connection and I can carry it around and monitor the brewery wherever I want.

2 thoughts on “The PoKeys57E Unit”